Described as ‘affordable high-end’ does this flagship from Revel’s new Concerta2 range punch above its weight?

The £2000 loudspeaker market is becoming an increasingly competitive place, and manufacturers now have to work harder than ever to ensure their products stand out from the crowd. One such is Harman International, and one of the loudspeaker brands bearing its technological know-how is Revel.

The current Revel Concerta2 range replaces the original Concerta models from 2005. These were typically wellliked designs, so revising them was not a task to be undertaken lightly. Fortunately the makeover Harman has given these newcomers has been thorough and sitting at the top of its six-model range is the £1900 Concerta2 F36 reviewed here.

The F36s are joined in the Concerta2 range by smaller F35 floorstanders and M16 standmounts, a C25 centre channel and S16 on-wall surround speakers, together with an 800W B10 active subwoofer. Thus a fully-fledged home cinema set-up is easy to assemble as necessary and since all the models are treated to the same technological advancements as the F36, they are very well matched. The product brief, says Revel, was ‘to offer a distinct sonic improvement over the previous Concerta series, be visually stunning with a more modern design, and finally to maintain a popular price point’.

To this end, everything about the F36 is new, starting with the cabinet. This is a pleasingly sculpted item that is shaped by cutting slots in the wood and curving it inwards, after which a layer of fibreboard is applied to the inner face to seal and brace the structure. Externally, a deep gloss finish is applied which is available in black or white. The grilles are magnetically attached and they snap on to the baffles with almost alarming vigour when offered up!

The F36’s driver complement comprises four units, three of which are 6.5in mid/ woofers, connected in a 2.5-way rather than standard 3-way configuration. Revel uses the additional low-end output of the topmost bass/midrange driver to supplement the two bass drivers, increasing sensitivity without making the design unduly difficult to drive [see KH’s lab report, p55]. All three drivers are based around a new cone material called ‘Micro-Ceramic Composite’ – a sandwich affair consisting of two layers of a ceramic material with an aluminium core. The ceramic layers are very stiff and light, but the addition of the aluminium (which is less dense) brings a degree of damping to moderate cone break-up.

In addition, the drivers’ motor units employ a long pole piece that helps to extend the reach of the magnetic gap. In making this modification, Revel has adjusted the position of the coil relative to the magnet, and optimised the progressive movement of the suspension. The work was aided by use of a Klippel Analyser, ideally suited for assessing the behaviour of any drive units, and sufficient for Revel to claim a consequent improvement in driver linearity and reduced distortion.

The loudspeaker’s bass output is augmented by a sizeable rear-facing port. Besides the inner and outer flare on the port tube to improve airflow and reduce noise, the F36’s port is what Revel calls a ‘Constant Pressure Gradient Design’. Put simply, most conventional port tubes have a constant diameter between the two flared ends but in the Concerta2s this gently curves inwards and then back outwards towards the inside. Revel claims that this – as the name suggests – keeps the air pressure within the tube constant and reduces distortion.

The F36’s tweeter is also brand new. Based around a 25mm aluminium dome, the unit has a hollow cavity behind the dome that reduces its free-air resonance to a claimed 800Hz. This is low for a tweeter and extends its usable frequency range to the point that the mid/treble crossover point can be set at just 1.8kHz. Furthermore, the new tweeter has a revised acoustic lens (a waveguide) that manages its directivity, its alignment with the mid/ bass drivers and also improves its overall sensitivity. And because the ‘lens’ sits in front of the delicate alloy dome, it offers the additional bonus of deterring prying young fingers!

Finally, the F36s are not unduly heavy at 23kg, making them easy to move around for optimal positioning. The rearfiring port benefits from some clearance away from back walls, to ensure that its bass does not become too turgid, but apart from this the F36s are quite roomfriendly. After some experimentation, I settled them at around two feet from the rear wall and 18in from the side walls in my listening room, where they were driven by a Naim Supernait amplifier.

Set up like this, Revel’s claims that the design of the Concerta2s has reduced distortion came to mind immediately, as the F36s are a very ‘clean’ sounding pair of loudspeakers. By this I mean that they tell you exactly what you are supposed to be hearing from a recording, with no unwanted artifice. If this implies that they sound a little safe at times, then this couldn’t be further from the truth as in fact they’re rather beguiling.

The F36s appeared to be an easy load to drive (as KH’s lab report confirms) and I found that my amplifier’s volume control was set a little lower than usual. Yet at no point did the speakers sound strained or did I feel that they were having to be pushed hard. Indeed, the Revels proved to be effortless in their presentation, and this held true with whatever kind of music I cared to send their way.

At the low end, bass was firm, clean and rhythmical. There are one or two similarly priced designs that will dig a little deeper, but the way in which the F36s handled bass meant that they never sounded lightweight. During initial listening, I noted a very slight ‘chestiness’ to the upper bass which never really went away, but this actually balanced out the slight lack of ultimate ‘clout’ in quite a neat way. The result was that the Revels were never overblown at the low end but were actually endowed with a pleasing bass warmth.

Thanks to this, double-basses had a delicious woody fruitiness to them and the pounding backbeat to Underworld’s ‘Jumbo’ from their Beaucoup Fish album [Junior Boy’s Own JBO1005438] was a chest-thumping delight. Equally, however, the Revels pulled off the rare trick of keeping the backing synthesiser line from the intro easy to hear within the mix, even when the drum-machine and bass line kicked in.

I was also most impressed by the way in which bass and midrange were seamlessly joined. This is often a strength of a good 2.5-way design, and the F36s showcased it very well. The overlap of the drivers’ frequency responses adds uniformity to the low to mid region when done properly and the smooth flow up to the main vocal and instrument region showed that Revel has this sorted. At no point did I feel that I was listening to three good drive units that weren’t quite working in unison, which even today can be a failing of a three-way.

As a result of this uniformity, Natasha Khan’s vocals on ‘Sunday Love’ from her The Bride album [Parlophone 0190295983901] were heartfelt and poised, the F36s making the best of her impressive range. Equally, however, the backing beat was firm and authoritative, yet did not overwhelm proceedings. The F36s pulled the performance together and presented it with fine degrees of spatiality and depth.

Imagery was another high point with these speakers. Their previously mentioned clean nature was accompanied by a sense of fine precision when it came to placing instruments and performers. Never stretching things too wide or projecting detail unrealistically, the F36s again seemed to be revealing exactly what was on the disc in the manner it was meant to be heard – neither more nor less. Intimate acoustic performances seemed to shimmer, almost spot-lit, between the pair, whereas the soundstage opened up superbly with large-scale orchestral works.

Even more rewarding, the treble from the new tweeters was more than a match with the high standards set lower down. The F36s’ top end was, once again, clean, but detailed and spry. That said, there was an occasional hint of ‘spit’ at the very top but only when the Revels were pushed hard and loud with unsympathetic recorded material.

The rest of the time, the F36s were an absolute delight in terms of transparency and crispness. The acoustic guitar strings on Metallica’s ‘Mama Said’ from their Load album [Blackened BLCKND011-1] were crystal clear and the cymbal strikes pin-sharp. And when the track grew in intensity, the Revels rose to the challenge with aplomb.

Ultimately, I found the F36s able to rock, croon, funk and even headbang enthusiastically when required. If you’re looking for a loudspeaker for all musical occasions, this floorstander could well be it. 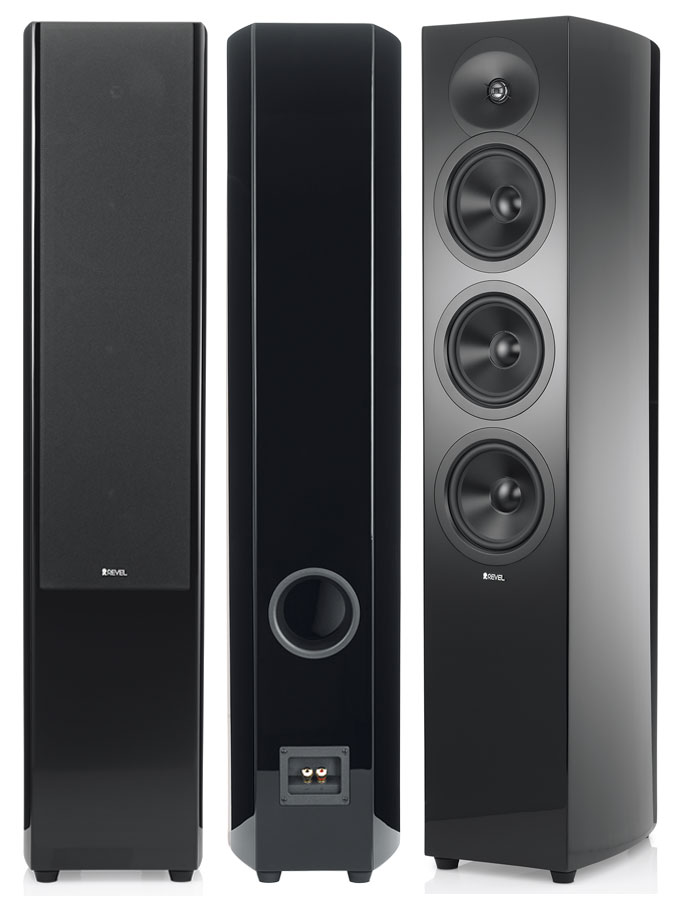